MP Clifford Hayes spoke to The Leader's Suzan Delibasic in protest of a proposal for a nine-storey hotel in the heart of Moorabbin.

The article can be viewed here: 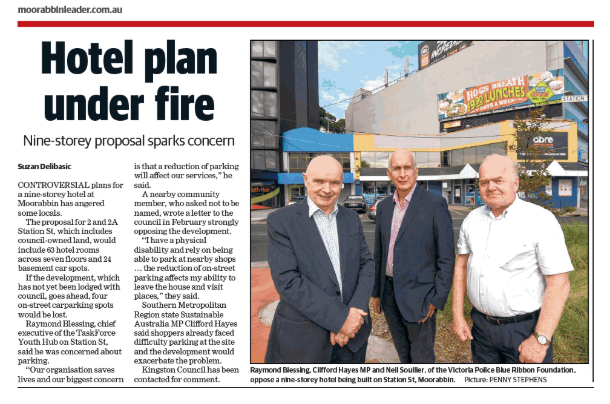 In his objection to Kingston City Council, Clifford said:

I refer to a proposed development before Kingston City Council for a nine-storey hotel at 2 and 2A Station Street, Moorabbin.

Several residents have indicated to me that this proposed tower would be situated in a small shopping precinct and adjacent to the bustling Moorabbin Railway Station area.

Not only do I believe that this is an over-development of the site, but I am extremely opposed to council allowing a development on what is publicly owned land for private purposes.

I have been advised that this development could have a significant negative impact on other traders in the precinct, as well as an extremely negative outcome in regards to parking availability.

Shoppers already face difficulty parking at the site and this would only be exacerbated by the development.

I note that in Kingston City Council’s Moorabbin Activity Centre Structure Plan, the council aims for Precinct B – encompassing the proposed hotel – to have a maximum building height of seven-storeys, transitioning down to five and four storeys respectively for properties south of Central Avenue and between Station Street and Tuck Street.

This nine-storey proposal would be inconsistent with the council’s structure plan and its vision for Moorabbin.

I also sympathise with the TaskForce Community Agency, which is located at the shopfront directly next door to the proposed development.

Staff at this youth hub fear the proposed development will deter clients from seeking and accessing vital drug and alcohol treatment.

I understand that this large-scale development will block direct sunlight to the hub and could have serious knock on effects for the proactive individuals trying to improve their lives by using this non-for-profit facility.

I observe that another objective of Kingston City Council’s structure plan is to: “Build upon the existing employment opportunities in Moorabbin.”

I would suggest that hindering a community agency which aims to find employment for disadvantaged residents would not satisfy this objective.

Against this background, I strongly urge Kingston City Council to refuse this application and to maintain ownership of the public land.